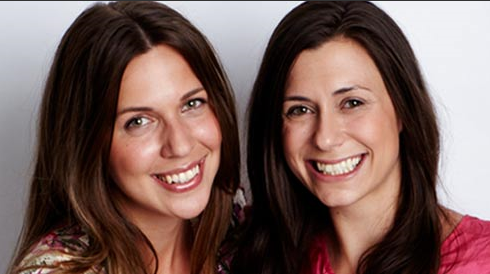 For "My Kitchen Rules" contestant Bella Jakubiak, "that" incident with the moth last week is one she would rather forget.
"It flew down my top," she says with a shudder.
"I hate moths and I hate cockroaches and things that fly."
Horrible it may have been, but it showed exactly why the sisters are tipped to win the second series of the hit Channel 7 show when it concludes next Tuesday.

As 27-year-old Bella panicked, Sammy, who turns 23 next week, can be seen calming her sister down while doing her best to stifle her own giggles.
"I think that's the secret of our success, being sisters," says Sammy. "We've been raised by the same person, in the same household, with the same values."
"Bella is very persistent, she's more organised in the kitchen. I'm more creative and more relaxed; thinking about the finished product, trying to calm her down."
"All sisters and brothers argue, but the advantage is we don't have to be nice to each other," says Bella.
"We don't have to say things like 'Could you please pass the salt?'. You say 'Hand me the salt'. You can be more clear and direct."
Despite the age gap, the two sisters say they have always been inseparable. Until recently they lived together and both worked in fashion, Sammy as a buyer and Bella in marketing, until they quit their jobs to join "My Kitchen Rules".
"Food is definitely what brings us together, not just the eating of it but the making of it too," explains Bella, who says the pair can often be found trawling food stores near their mother Lidia's Pymble home. Last year she and Sammy prepared a sit-down feast for 40 people for Lidia's 50th birthday and they recently launched a blog (sammyandbella.com) documenting their own food adventures. Now they plan to start their own catering company.

"Everyone knows we love food, but until the show we really only thought of cooking as bringing happiness to people," says Sammy.
Their parents emigrated to Australia from Poland 32 years ago and European dishes still feature heavily in their cooking repertoire, such as the beetroot soup with mushrooms that won over judges Pete Evans and Manu Feildel early in the series.
"Polish families are very similar to Italian families in that we don't go out to restaurants and there is no such thing as takeaway," says Bella. "Our mother is really wary about eating outside; how fresh the food is, how hygienic it is. She believes the best food is the food you make at home."
As part of a large family - they have two half-sisters and a half-brother plus their extended family - meals at home are often a big event.
"Events like birthdays, Christmas and Easter we'll spend a couple of days preparing," says Bella. "You'll have us, Mum, my aunt and cousins all sitting around the dining table making dumplings."

The sisters are the fourth generation of Jakubiak women for whom cooking is in the blood. Their grandmother Ursula was taught to cook by her mother and went on to become a chef who worked, among other things, for the Polish embassy, cooking for high-profile guests such as former US President Bill Clinton.
"We had food from all over the world growing up because she used to have to cook for everyone," says Bella.
"The first time I ate sushi I wasn't with friends. I was seven or eight years old and my grandmother said 'Let's make sushi.' You wouldn't expect that from a little old Polish grandmother."

Such variety has made for famously diverse taste buds, say the sisters. "There are a lot of things we eat which others don't," said Sammy.
"Our mother never made two dinners for us. If the adults were having olives and salami, then we ate it too," adds Bella. "We had a very adult palate."
They admire Michelin-starred Irish chef Richard Corrigan for his emphasis on foraging and fresh produce and his "nose to tail" approach to eating.
"We're absolutely not vegetarians," says Bella. "We love offal, but I strongly believe you should always respect an animal. That means not destroying the meat, by eating organic and not turning your nose up at all parts of the animal."

One day they say they'd love to pen a cookbook, but for the moment at least, they're flat out running with their blog and gaining the experience they need to launch a career in food. Bella juggles working at Twig Cafe in Surry Hills with a job with pasta company Barilla, while Sammy works as a legal secretary. They're also putting together a charity dinner for victims of the Japan earthquake.

"This ("My Kitchen Rules") has actually made us closer because we're with each other 24/7 again," says Sammy. "We still say the same things to each other and we still fight," says Bella. "But it doesn't matter. We're sisters and I'll always love her."
The series final of "My Kitchen Rules" screens on April 13 at 7.30pm on Channel Seven.